An important change in attitude has come to the world of tequila, where we pursue the process of extracting the agave hearts, cooked and milled with maximum hygiene, whose honey made a controlled fermentation and double distillation in stills is separate the different fractions, selecting only the heart for bottling or aging in barrels.

The formerly called mezcal wine comes from interbreeding between the ancient pulque, the Mexican who produced wine since ancient times, with the stills that brought the first Spanish who settled in New Galicia. The distillation and clandestine craft “maguey brandy” in rudimentary stills, was transformed with the arrival of the railroad in a real industry, tequila travel outside their borders.

The Mexican Revolution of 1910, involved a search for identity in the country, and tequila became the perfect companion for the followers of Pancho Villa. When they invaded Guadalajara, capital of Jalisco, consumed large amounts of distillate, and removed many carts loaded barrels of the precious nectar. Revolutionary artists, the painter Diego Rivera and the famous muralists, tequila embraced as an unmistakable symbol of Mexican.

In 2006 UNESCO declared the Agave Landscape Tequila Valley as a World Heritage Site, which covers 35,000 hectares of blue agave and tequila traditional haciendas and distilleries. In his statement, Unesco said “the vast landscapes of blue agaves shaped by the culture of this plant, used since the sixteenth century to produce tequila, and from at least two thousand years to make fermented beverages.” And he defended the agave culture as “an intrinsic element of Mexican national identity.”

The agave weber blue variety tequilana is the maguey to produce better quality tequila plant that many erroneously confused with a type of cactus. The blue agave reproduces by suckers, which rise to five years of the mother, and transplanted to the ground before the rainy season, and reaches maturity between seven and ten years, when they begin to exude their sticky pads a drops of honey.

Eventually, the jimador with coa, a barrette semicircular sharp point, cut the leaves of the agave, leaving only the core of the white ground. It is extremely important to remove all herbaceous parts, which only contribute to tequila sour notes. The huge cones can reach weights of 30 to 150 kilos, and cut in half to be transferred to the distillery, formerly on the backs of donkeys.

In the tequila haciendas proceed to cooking for 24 hours in masonry ovens. This is the traditional system, still widely used, although some opt for tequila modern autoclaves. Once cooled, the cooked agave acquires a pumpkin tone, becoming its nutrients into fermentable sugars. Formerly used stone bakeries, where a couple of oxen moved the mill for grinding stone pineapples and to extract its honey. These yeast is added and fermentation begins, resulting in a ranking of between 4 and 7 alcohol. 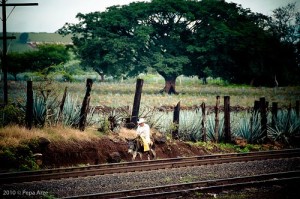 This “must Dead” takes small stills, where it will double distillation, which traditionally were made of copper, although many tequila now replaced them with stainless steel. In the second distillation, flows a limpid liquor of 55 ° alcohol, fruit of the separation of heads and tails.

In Mexico, many aficionados prefer the white or silver tequila, obtained directly from the still or only two months of maturation in oak barrels for their seductive fruity and herbaceous notes. Others prefer the Reposado, which can age in the barrels up to twelve months, and combines notes of agave fruit with toast and spicy wood, ideal accompaniment to spicy Mexican cuisine. The Añejo and Extra Añejo tequilas are maturing between one and three years the first three years and the second, and both have an aromatic and taste great fusion between the primary and wood notes. As a more mature style of tequila and have digestive virtues, the aged are often chosen as the top desktop.

In Amatitán, people close to the hot town of Tequila, the museum is Herradura, where they maintain in perfect condition tequila the old plant, originating in 1870. Besides the traditional Tequila Valley, home of the most popular tequilas: Cuervo, Herradura and Sauza, the region is Altos de Jalisco (Guadalajara 120 kilometers) of high altitude, with reddish soil, which brings more floral notes and fruit to the spirits. Distilleries most emblematic of this region are Feliciano Vivanco, Tequila Quiote, and Don Julio, producing a distinctive personality spirits.

Although perhaps the most surprising of all is Patron Tequila, located in Atotonilco, committed to a perfect combination between tradition and modernity, of the master’s hand tequila Francisco Alcaraz. His impressive mansion of modern construction, and sophisticated as the Grand Patron tequilas Bordeaux, which matures in barrels last year a Grand Cru Bordeaux, has prestigious tequila to levels previously unknown.

The blue agave tequila, has achieved a distinct personality: a spirit of great aromatic finesse, which is fully rooted in the Mexican soul.

Contact me at gusmelor@hotmail.com I would be happy to drive you to this region of Mexico,