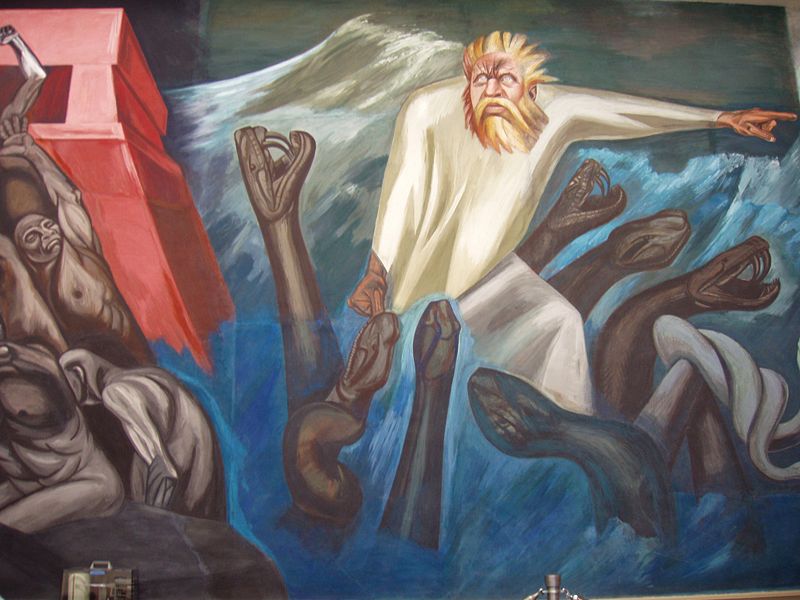 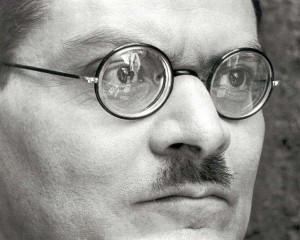 Life and Work of J.C. Orozco

One of our highlights during our Guadalajara City Tour is of course, when we visit Guadalajara Murals painted by Orozco.
Jose Clemente Orozco was born to Rosa de Flores Orozco, married Margarita Valladares, and had three children.

As a young boy, Orozco’s family moved from Cuidad Guzman to Guadalajara and then to Mexico City, where he attended primary school. At this time, Jose Guadalupe Posadas, a satirical illustrator whose engravings about Mexican culture and politics challenged Mexicans to think differently about what was going on in post-revolutionary Mexico, worked in full view of the public in shop windows located on the way Orozco must travel to reach school. In his autobiography, Orozco confesses, “I would stop [on my way to and from school] and spend a few enchanted minutes in watching [Posadas]… This was the push that first set my imagination in motion and impelled me to cover paper with my earliest little figures; this was my awakening to the existence of the art of painting.” (Orozco, 1962) He goes to say that watching Posada’s engraving decorated gave him his introduction to the use of color. After attending school for Agriculture and Architecture, Orozco studied art in earnest at the San Carlos Academy

With Diego Rivera, he was a leader of the Mexican Mural Renaissance. An important distinction he had from Rivera was his critical view of the Mexican Revolution. While Diego Rivera was a bold, optimistic figure, touting the glory of the revolution, Orozco was less comfortable with the bloody toll the social movement was taking. Orozco is known as one of the “Big Three” muralists along with Diego Rivera, and David Alfareo Siqueiros. All three artists, as well as the painter Rufino Tamayo, originated in Mexico, experimented with fresco on large walls, and elevated their art of mural in fresco to the world-fame class known as Mexican Mural Renaissance. 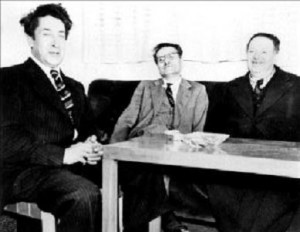 Orozco collaborated accessing to modern aesthetic throughout Latin America, although this claim has only a relative value and should be considered a peculiar characteristic of the art he practiced, powerfully influenced, of course, by the pedagogical vocation and encouraging informed political and social the work of Mexican muralists. They engaged in carrying out a task of educating the masses, in order to incite them to revolutionary awareness and national artistic language had to find a direct, simple and powerful, without too many concessions to the avant-garde experimentalism.

Between 1922-24, Jose Clemente Orozco painted at the National Preparatory School the murals: “The Elements,” “Man in Battle Against Nature,” “Christ Destroys His Cross,” “Destruction of the Old Order,” “The Aristocrats,” and “The Trench and the Trinity“. In 1925, he painted the mural “Omniscience” at Mexico City’s House of Tiles. In 1926 – another one at the Industrial School in Orizaba, Veracruz.

A significant date in the pictorial history of José Clemente Orozco is the year 1922. By the time he joined Diego Rivera, David Alfaro Siqueiros and other artists to start the Mexican muralist movement, how much international predicament and came to have monumental works filled the cities. Nationalist trend, educational and popular, the movement sought to implement the concept of “street art” that painters defended, putting their art to the service of a clearly leftist ideology. 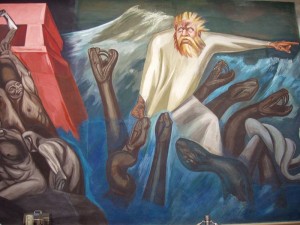 Between 1927-34 J.C. Orozco lived in the USA. In 1930, he painted murals at the New School for Social Research, in New York City. One of his most famous murals is The Epic of American Civilization at Dartmouth College, New Hampshire, USA. It was painted between 1932 and 1934 and covers almost 300 m² (3200 square feet) in 24 panels. Its parts include: “Migrations,” “Human Sacrifices,” “The Appearance of Quetzalcoatl,” “Corn Culture,” “Anglo-America,” “Hispano-America,” “Science” and another version of “Christ Destroys His Cross”.

The abandonment of academic standards and guidelines, but without submitting to the “recipes” of art and innovations from Europe: his creations preferred to turn to the sources of pre-Columbian art and Mexican folk roots. The artist created a style well suited to the task that had been allocated, his political and social concerns and his willingness to teaching, and later (along with Rivera and Siqueiros) served in the Union of Painters and Sculptors, decorating with vast murals numerous public monuments, a clear sign that he wanted to be exemplary and vindictive, demanding a payment equivalent to the salary of any worker.

J.C. Orozco was, as an artist who chose the “political commitment”, an artist whose themes reflect the Revolution, with tormented force and unsurpassed expertise, tragedy and heroism that fill in Mexican history, but also attest to a remarkable penetration rates when it captures cultural or ethnic mosaic portraying his country. 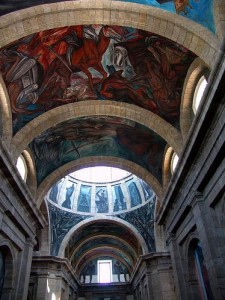 After returning to Mexico, between 1936-39, Orozco painted the Cabañas – among others – the mural “The People and Its Leaders” in the Government Palace, and the frescos for the Hospicio Cabañas considered his masterpiece. In 1940 – for the Gabino Ortiz Library in Jiquilpan Michoacan. Between 1942-44 – for the Hospital de Jesús in Mexico City. Orozco’s 1948 “Juárez Reborn” huge portrait-mural was one of his last works.

With the clear intention of being a plastic shell of the Revolution, José Clemente Orozco stood a monumental, deeply tragic for its content and topics related to historical events, social and political issues that had prevailed in the country, provided always from the disappointment and from a leftist perspective, extremely critical, but also for its style and form, by the stroke, the palette and the composition of his paintings at the service of a violent and wrenching expressiveness.

His work could be framed in a fiercely expressionistic realism, the result perhaps of his contact with the Parisian avant-garde, despite his conscious rejection of the aesthetic influences of the Old World, his is an expressionism that is manifested in large compositions, which, by their geometric rigor and his strong hieratic characters, make us think, to some extent, in some examples of pre-Columbian sculpture. It should be noted here that Orozco, Rivera and Siqueiros, the “Group of Three” as they liked to be called,  demanded a return to origins, to the purity of the Mayan and Aztec forms, the main feature of his artistic work.

To learn more about Jose Clemente Orozco and admire his master pieces
Join us for a Tour of Main Murals and Painings by J.C. Orozco